What are Mens Stud Earrings?

Mens Stud Earrings and sizes are made from any material, including metal, plastic, glass, gemstone, pearl, wood, bone, and other materials. Ultimately the size of the earring is limited by its physical ability to carry the weight so as not to damage the ear. The ken ki (or kended or jhumka) are dressed in robes and are dressed. -Differently different fractions are going to differ.

Ear piercing for earring is one of the oldest known forms of body transformation, with artistic and written references from cultures around the world dating back to the period of early history. Gold Mens Stud Earrings and other jewelry were found in the royal cemetery in Ur of Sumer, dating back to 2600 BC, in the early dynastic period of Mesopotamia.

Gold, silver and bronze Mens Stud Earrings were prevalent in the Minoan civilization (2000–1600 BC) and examples can be seen on the frescoes of the Aegean island of Sandorini, Greece.

What are Mens Stud Earrings made of?

Sterling silver must be at least 92.5% pure silver, with the remaining 7.5% filled in by another metal. Most of the “fill” is copper (another soft, but non-allergenic metal), with a tiny bit of something else to help the soft metals keep their shape and not get damaged. Sometimes, that other metal is nickel.

The meaning of EARRING is an ornament for the ear and especially the earlobe. An earring is a piece of jewelry attached to the ear via a piercing in the earlobe or another external part of the ear. Mens Stud Earrings have been worn by people in different civilizations and historic periods, often with cultural significance.

World’s Largest Wholesale Mens Stud Earrings Store, one of the leading manufacturers, wholesalers, and importers of fashion Mens Stud Earrings and accessories based in India which was established as Silvesto India Pvt. Ltd. in 2000 and at people’s service for the last 3 decades. We are at the forefront when it comes to fashion Mens Stud Earrings development. We have got Multifarious Premium Clients across the world and have countless happy customers from India. Now we are very excited to announce the launch of our new website for wholesalers/ Retailers/ Re-sellers across nations and offering them products at Factory prices with Premium product quality. We assure you the best prices than anyone else offering in the wholesale market across India, Chinese Markets, or other websites. We have over 5000+ styles, the vast amount of latest designs of Mens Stud Earrings collections and specialize in manufacturing as per buyers’ specifications.

Getting to Know the Different Types of Earrings & Earring Backs 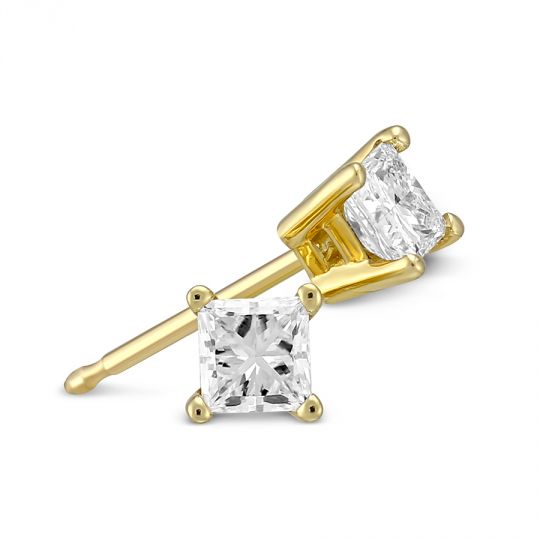 Stud earrings tend to be on the small side and sit snuggly on top of the ear lobe without dropping downward, looping backward, or climbing upward. Typically featuring a simple design, studs are comfortable to wear and look great with any outfit. Diamond studs are a jewelry box staple and one of the most popular styles of earrings. 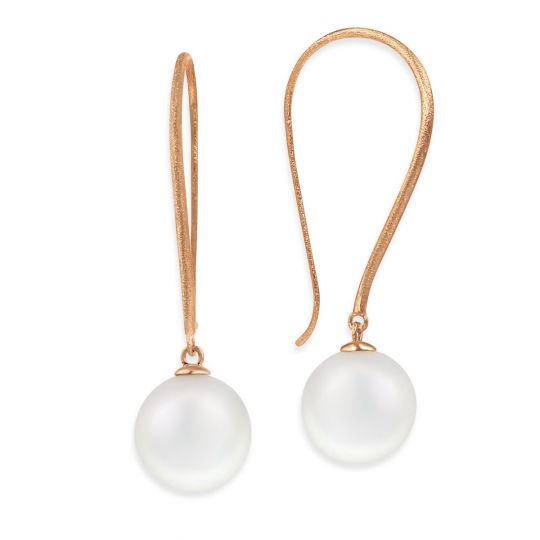 If you want an earring that’s still simple but has a little bit of length to it, a delicate drop earring might be just what you are looking for. Drop earrings hang down below the earlobe and are typically stationary, almost like an extended stud earring. 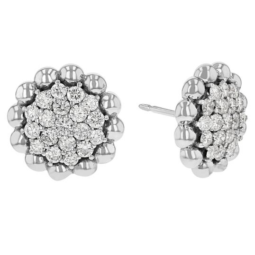 Cluster earrings sit tightly on top of the earlobe and are comprised of several stones or gems grouped together to create a cluster. These decorative earrings can come in the form of a stud or have a slight drop. 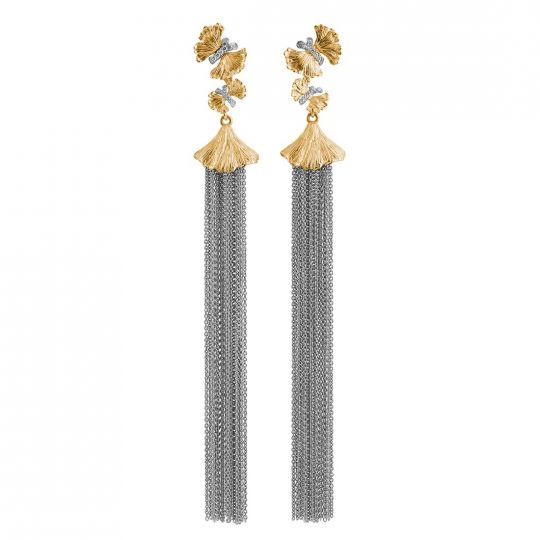 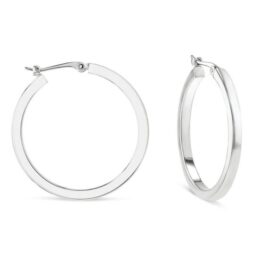 Hoop earrings are shaped like hoops and loop from the front of the earlobe to the back. While most hoop earrings are round, they can come in varying shapes like triangles, squares, and ovals, and range in size from small to large. Smaller hoops create an understated look while larger hoop earrings provide for a more dramatic effect. For a glamorous look, opt for a pair of in and out diamond hoops. 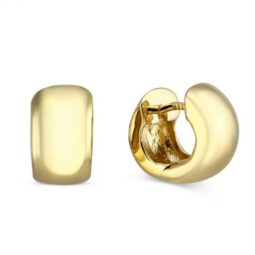 Huggie earrings hug the earlobe, wrapping snuggly around it. These mini hoops are ideal for those that want the look of a hoop earring without the risk of them catching or snagging. 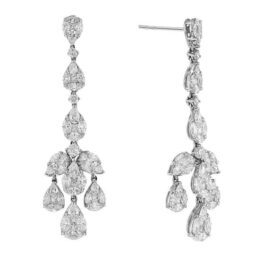 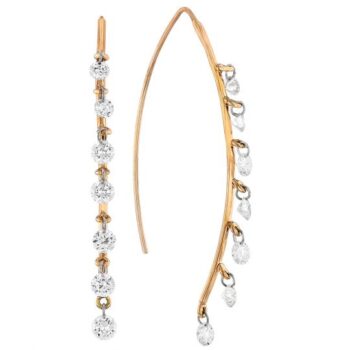 Featuring a more modern, minimalist style, threader earrings consist of a thin piece of metal that threads through the piercing and hangs on both sides of the earlobe. 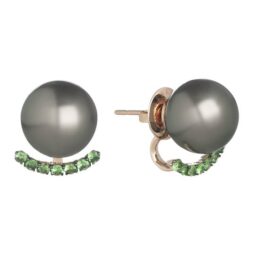 Jacket earrings consist of a latch or stone in the front that holds the earring in place while the main part of the earring sits behind the ear. This unique earring style is designed to hang down behind the earlobe, creating a fun and unique peek-a-boo effect. 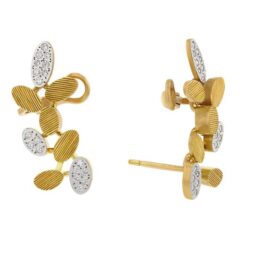 Ear climbers are one of the newer, trendier earring styles. Instead of dangling downward, these earrings start at the base of the ear and climb upward. 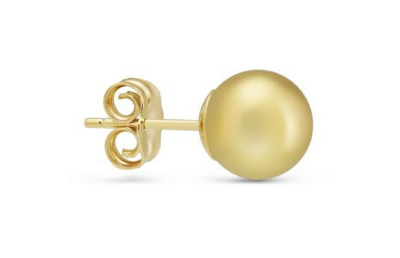 Post back earrings are the most common type of earring backing and are used on everything from studs to dangling earrings. There are several different options when it comes to post back earrings, including push backs, screw backs, and lock backs. 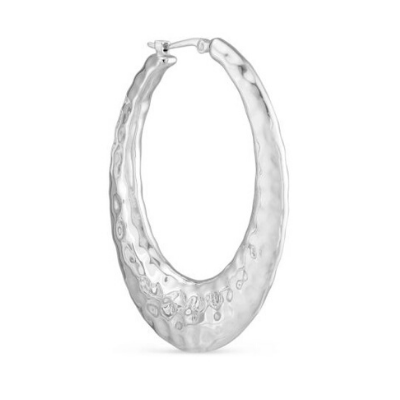 Hinge back earrings feature a hinged post that snaps onto a groove on the back of the earring. Also known as a saddleback or hinged snapback, these backings are commonly used on hoops and huggie earrings. Once you hear the earring snap or click, you know it’s secure. 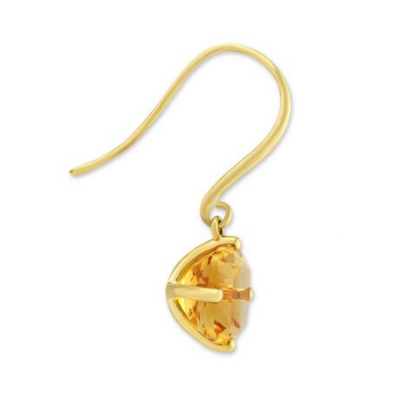 Shepherd hooks are a type of ear wire that loops through the piercing and hangs on the backside of the earlobe. Because of their hook-like design, this style can be worn without an additional backing to secure the earring in place. 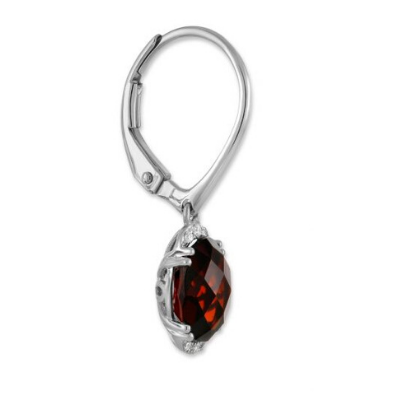 Lever backs, also known as latch backs, are another type of earring back commonly used on drop and dangle style earrings. The wire goes through the piercing and clasps with the earring backing to form a complete loop. They are a durable and secure backing option for earrings. 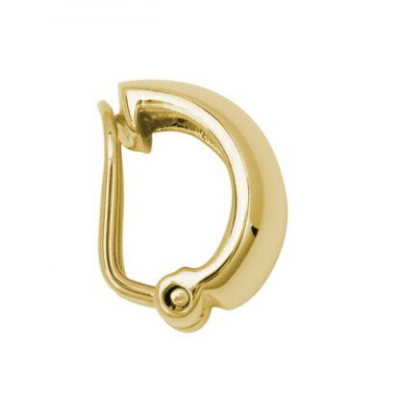 Earrings featuring a clip-on back are great for those who do not have their ears pierced as well as those who do. The clip-on backing clasps gently to the earlobe holding the earring in place, no piercing necessary.

If you need help picking out the perfect pair of earrings for yourself or someone else, one of our jewelry experts would be happy to assist you. Call +917073769754 during store hours to speak with one of our friendly and knowledgeable sales associates.

Want to buy high-quality products at reasonable rates? Welcome to a world of choices of affordable and stylish India Mens Stud Earrings for every occasion at Silvesto India Pvt. Ltd. When you are spending a lot of leisure time or plan to do so, then do not miss out on many offers on the best quality 4327 items purchased for casual or special occasions of your life. This is the right time to start taking a tour of our Silvesto India Pvt. Ltd. inventory of high-quality fashion Mens Stud Earrings At at unexpectedly low prices while the stock lasts. You don”t need to walk to the stores for Pins, Brooches, Mens Stud Earrings. Search for your favorite type on our platform and let us deliver it to you without any delay.

With Silvesto India, shopping for the most luxurious & regal Mens Stud Earrings is now just a click away. Each design from every collection has been created keeping in mind tastefulness & delicacy – so Silvesto India is the best place to buy Mens Stud Earrings online. In fact, wearability and affordability are the pillars of our brand. Our vision is to make luxury affordable as well as accessible to everyone. We understand that fashion is essential and shopping is a necessity. With affordable and sustainable jewelry, we wish to make your online shopping experience enriching and easy. Silvestro India is an investment for life as we offer a lifetime guarantee and free replating of our products.

We are one of the leading fashion Mens Stud Earrings manufacturers and wholesale suppliers, so for bulk orders please place an order online.

Silvesto India Pvt.Ltd is an established Mens Stud Earrings manufacturing company that has been in this field for the last many years now. Mens Stud Earrings are an integral part of life. An accessory that is loved and used worldwide, our expertise in Mens Stud Earrings has taken us to several places globally and given us a chance to associate ourselves with people who share our love and passion for jewels. After establishing our feet deep and strong in our motherland, India, we are now looking to broaden our horizons to many other parts of the world.

For over decades now, India and America have had close associations in trade. Mens Stud Earrings is by far one of the most significant trade interests that both countries share. By becoming one of the leading Mens Stud Earrings suppliers, we aim at bringing to the American people a wide variety of exquisite Mens Stud Earrings that is sure to solve their multi- purposes. Whether you are a designer who’s looking for the perfect manufacture to bring life to their designs, or a shop owner, who wants to add a touch of class to their shop with a suitable collection, or someone who’s looking for the right set of Mens Stud Earrings for personal use, we at Silvesto India Pvt.Ltd are, without a doubt, a one-stop destination for all your jewelry-related needs.

Price is an essential factor when it comes to jewelry. You can find many designers and manufactures selling the same piece for different prices. However, we at Silvesto IndiaPvt. Ltd does not believe in this policy. We ensure that all our products are priced as per their estimations and are a fair value for the price that our customer is paying. As one of the leading wholesalers in not just India But also America, we bring Mens Stud Earrings that are not just beautiful but also pocket-friendly. As one of the most genuine and reliable Mens Stud Earrings wholesalers, we bring to our clients the following benefits :

It will not be wrong to say that the Mens Stud Earrings is a diverse field from gold to silver to brass to diamonds to artificial to precious and to semi-precious. This segment has something to offer for everyone. But many times, people are not aware of the right place, which not only makes them settle for less than what they are looking for but also pay a large amount of money for the same. We at Silvesto India Pvt.Ltd aim at replacing this hurdle with luxury. We aim at bringing classy and affordable Mens Stud Earrings to your doorsteps in the easiest and the most user-friendly ways.

Silvesto India Pvt.Ltd has created an aced and niche name for itself in the Mens Stud Earrings business-owning their designs, creativity, quality, innovations, and designs. A company that is dedicated to bringing a refined and refreshing range of products to their customers, we at Silvesto India Pvt.Ltd is dedicated to making Mens Stud Earrings a part of your everyday living.